Coco’s Training is ‘Pup and Running’ 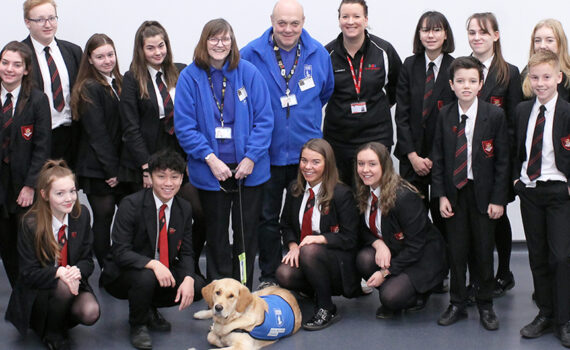 Students from The English Martyrs Catholic School and Sixth Form College have met the Guide Dog they sponsored as part of their fundraising campaign.

Guide Dogs for the blind was chosen to be supported by students of St. Anne Line house as their house charity for the academic year beginning in September 2017

Many events took place such as a Coffee Morning, Throwing Wet sponges at the Teachers, Football Tournament, Bake sales and various other activities to raise more than £1800 for the charity.

In September 2018, Mr. Neil Griffiths, a first time Guide Dog owner, arrived at school with his furry companion, Hayley, a 3 year old Golden Labrador cross and Mrs. Val Cook, treasurer of the Teesside branch of Guide Dogs for the Blind to collect a cheque for £1849.12.

Mrs. Rebecca Corcoran, House Leader for St. Anne Line house said: “The main goal of the fundraising was to be able to sponsor a puppy, one year on from the cheque donation, we are happy to meet Coco.”

Born in February 2019, the 9 month old Golden Retriever is well into her training with puppy walkers Ian and Helen Berwick.

“She’s the most chilled out dog we’ve ever trained.” said Ian whilst telling the students about Coco’s journey so far.

John Hopper, who coordinates puppy training for the charity, told the students about the training programme and the difference Coco would make to someone’s life.

“In a few months’ time, Coco will move to the next step of her training and when she is around 2 years old she will be united with her owner.” He told them.

“Not every dog makes it through the training, but we are already really impressed with her nature and we are confident she will go on to be a fantastic guide dog.”

Coco was quite an attraction around the school and as you can see by the images, seems to enjoy having her picture taken.

“For them to see the result and be told how what they have achieved is going to drastically improve the life of whoever is lucky enough to gain Coco as a companion was brilliant.”

“It makes me so proud, and hopefully we will see her again in the future.”