The EMS History Department believes that the History Curriculum must give every student important knowledge and understanding of Britain and the wider world so that students know how their lives have been shaped by their history and the people around them.   This means the in-depth study of the struggle for freedom and equality throughout time so that students realise the importance of the different types of freedom and equality that they gave gained and the sacrifices made to achieve this.   This investigation will help students understand the role of the individual, groups, the church and government in denying or securing these rights and freedoms so that they have a better understanding of the world they live in today.  In order to have a deeper understanding of the role Britain has in their own lives and the wider world, students will study its struggle for power over time.  This will give the students’ knowledge of Britain’s role within international relations and gain knowledge and understanding of the positive, negative, short term and long- term consequences of the struggle for international relations.  This knowledge and understanding is vital in order that the students at EMS leave with a deepened political understanding that informed citizens require and also develop their knowledge, understanding and skills so that they make the best economic and social choices as adults.

Struggle for freedom and equality

To investigate the history of the individual and states’ actions to deny people their freedom and equal rights.

To gain knowledge of the positive outcomes of this struggle e.g. better working conditions and the vote but also the negatives e.g. terrorism

In Year 7 students will study class struggle by investigating the role of the peasantry and lower classes versus the King.  They will also be introduced to the importance of religion and how this led to religious struggle against the state by studying the role of the Tudors and Heresy as well as the Crusades.

By Year 8 the study of this theme is widened and deepened in complexity by looking at the Civil Rights movement and the class struggles involved in the industrial revolution.  It will also introduce the struggle of women who fought for gender equality, and social and political freedoms.

Year 9 widens and deepens the students’ knowledge and understanding of the struggle for equality and a range of freedoms by studying the treatment of the Jews in Nazi Germany.  This shows the complexity of History by considering the gradual removal of a whole religion’s freedom by a persecuting government.  The Year 9 Curriculum challenges the students further by adding depth to knowledge of Nazi Germany, The African-American Civil Rights Movement and the struggle for power across America during the 1920’s, finally by looking at modern conflict across the world focussing on terrorism and its effect on society.

For students continuing their learning of History at Key Stage 4 and 5, the EMS department have chosen topics that further deepen and strengthen their knowledge of the struggle for equality.

The Edexcel GCSE course delivers knowledge and understanding of the making of Britain during Elizabethan times.  Students gain an in-depth insight into the Elizabethans’ treatment of the Poor by and the judgements made on the poor as criminals.  They study the complexities of the state trying to deliver freedom whilst retaining power when Elizabeth introduces religious compromise.   The Germany unit deepens key stage 3 knowledge of German society’s struggle for freedom against a dictatorship state by also considering various groups within Nazi society and various methods used by the state to deny those freedoms.   The Crime and Punishment unit gives a breadth coverage from 1000 to modern day delivering the knowledge and understanding of Social and Political struggles – across time from peasants and the forest laws, the working class and Tolpuddle Martyrs, racism in Whitechapel during immigration and modern struggles.  It builds on key stage 3 knowledge by also looking at peers who deny civilians their freedom and equality in topics such as human trafficking and hate crimes.

During Key stage 5, this knowledge is built upon further by studying the early Tudors and how their denial of religious freedom shaped the whole history of the British Isles.  In the Russia 1894-1941 unit, students learn about the series of political and social struggles across Russia specifically focussing on Civil War and unrest.  They consider the impact on people living in an enforced ideology that affects all other aspects of their lives e.g. political/economic/religious and social.    They gain knowledge and understanding of the Cold War’s far reaching consequences that are still felt today in international policy especially with Russia and China.  In year 13, A level students build on previous knowledge of the civil rights movement by considering the Civil rights of 4 groups over a breadth study and examine groups that denied Natives, women, African Americans and workers these rights.  Students develop knowledge of the complexity of struggling for civil rights and that at some points in history it is easier to achieve rights than others e.g. during war.  They deepen their knowledge of the complexities of History and realise that different rights are more important than other rights e.g. political/economic and social.

The struggle for Power and international relations

To investigate the positive impact for the country and its people

To investigate the consequences of the pursuit of power for armed forces, Britain and other countries

In Year 7 students will study England’s rivalry with other powers and especially the causes of wars, with a particular focus on religion such as the Crusades which has a connection with the Christian and Islam issues today.  They will also study England’s increasing power and rivalry with other nations by studying the Spanish Armada and start to consider the religious causes versus power.   This knowledge and understanding is further developed by the study of Exploration and England as a great sea-faring nation.  This develops the knowledge and understanding of Britain as an Empire and global power, linking again to international developments today.  This study is widened and deepened by looking at Britain’s role in the cause of World War One and the subsequent war itself.  This helps the students develop awareness of international diplomacy and how small, local affairs trigger international disputes.  This study is built on in year 9 by the study of failed diplomacy and World War 2.  Students develop their knowledge of the consequences at home and abroad for countries fighting in war and start to contrast and compare.  The year 9 curriculum becomes increasingly complex and topical as students study the Cold War and the consistent tension between rival countries.  It also shows the complexity of international diplomacy and agreements and deepens their knowledge of topical and very relevant issues such as terrorism and subsequent wars in Afghanistan and Iran.

The Edexcel GCSE gives more depth and understanding to international conflict and its causes as students study the Cold War across time and start to make judgements on why some causes are more important than other and why international meetings affect not only the countries involved but the wider world.  The GCSE students add weight to their earlier knowledge by the study of England as a growing power and the complexity of war e.g. Political/economic/social/individuals/long term and short term especially with Elizabeth and Spain’s relationship

At A Level, the curriculum regarding relations and warfare is deepened as students study how international tensions affect Germany politically, economically and socially.  The students investigate how decisions made in diplomatic meetings can have far reaching consequences for individuals living in affected countries e.g. Germany and its division. 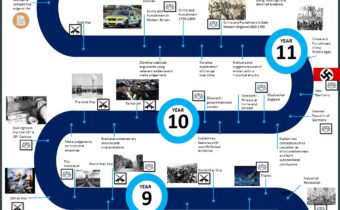 History at English Martyrs is a fantastic opportunity for students to study about the past in order to understand the present whilst preparing for the future.

We study the Edexcel GCSE History qualification which includes three units of work: