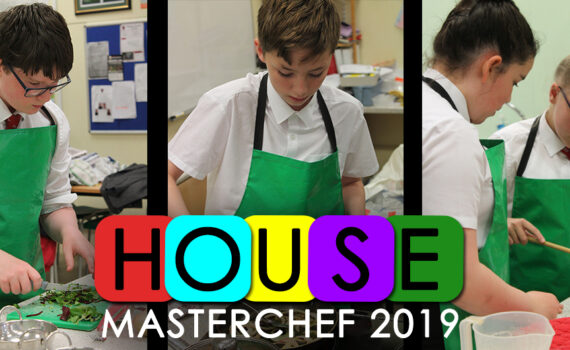 On Tuesday 11th June 2019, it was pots and pans at the ready as our House Leaders organised a Masterchef competition. The rules of the competition were simple and quite challenging!

“Create a two-course menu for two people with a budget of £5 with just 75 minutes to prepare, cook and serve the menu to our hungry judges. Only one team per house was allowed to enter the competition and each team was to be comprised of two students and one member of staff.  Receipts had to be submitted before the cooking began” Let’s Cook!

St. Anne Line, whose team was made up of Mr McLintock from the IT Department and students Rowan Lawson and Amy Saxon, produced a main course of Bassa Fillet with Potatoes and Savoury Rice. For dessert, they served up a Triple Layered Chocolate Brownie topped with a fresh strawberry.  A seafood option was a risky choice as one of the judges doesn’t like fish! This may have left them ‘skate’ ing on thin ice (get it?) – you’ll find out later!

Year 8 students, Sonny Paylor and Jacob Fawcett drafted in the expertise of house leader Mr Nicholson to try and win it for St. Margaret Clitherow. It sure looked tasty, however, when we asked what they were serving it was simply called a Chicken Pasta Dish and for dessert a Classic Cheesecake. Not an easy one to get set in just over an hour – let’s hope it worked out for them!

No house leader featured in the team from St. John Boste. Mrs Spears was there cheering them on, however, spent most of her time pinching sausages from St. Thomas More.  Maybe a strange tactic?  They are the point leaders so who knows! Amelia Gaffney and Aimee-Leigh Izzet drafted in Mr Morrison from the RE Department to help them create a bigger lead at the top.  A Sausage and Meatball Ragu with Penne Paste and Parsley Garnish was on the menu followed by a Chocolate Pastry Ring.  Are you feeling hungry yet?

Bottom of the house point pile Blessed John Ingram needed a solid menu to try and scrape some points back in the league table.  House leader Mr Morrison teamed up with Ethan Hardy and Fraser Henderson to cook up a Vegan Bolognese with Crispy Onions followed by a Deconstructed Cheesecake. The pressure was on to serve up something really tasty, we’ll find out if they managed to win soon.

We mentioned St. Thomas More earlier and I bet you are wondering if any sausages made it into the dish. Well, they did. House leader Mr Corcoran, a connoisseur of Yorkshire Puddings, guided Matilda Tiplady and Emma Gardner to serve up a Toad in the Hole with Mashed Potatoes and Gravy.  This was complemented with Jam Sponge and Custard. Yes, you are right, that is a hearty sounding menu, well providing the puds rose to the occasion – let’s find out.

Our judging panel comprised of Mr Roberts, who teaches Food Technology. Mrs Aird one of our Learning Assistants with an astute palate and Pastoral Manager, Mr Blackwood who stepped in after we let down by Greig Wallace. (only joking).

After they had worked their way around the meals, they adjourned to make their decision while the students, and other staff who had arrived to sample the delights, tucked in.

The judges praised all the students. “It was a really close contest and I must say, I am really impressed with the amount of skill that has gone into making the meals.  You should all be really proud of yourselves.” said Mr Roberts.

Fifth place was awarded to John Ingram with John Boste coming fourth. Next came Thomas More, Mr Corcoran’s puds did rise, however, not enough to sway the judges away from choosing Margaret Clitherow to come second with the team from Anne Line taking the maximum points in first place.

All the students and staff did an amazing job and there was a lot of laughter and fun along the way.  Well done and thank you to everyone who took part.

There are more pictures in the Gallery