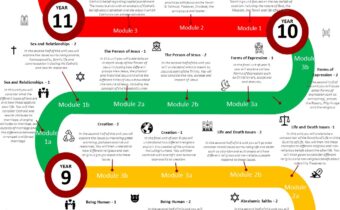 All students from in KS3 study Religious Education. The curriculum is reviewed on a yearly basis, meets Diocesan and New Bishop’s Curriculum Directory requirements and allows students to gain a wide range of skills in Religious Education. Formal written assessments are carried out at the end of each unit and Pupil Progress reported back to parents.

Students do a compulsory EDUCAS GCSE RE syllabus, which has 3 elements which are examined at the end of Year 10-

There is no coursework element to the course.

Religion and ethics – Learners will study: normative ethical theories/the application of ethical theory to two contemporary issues of importance/ethical language and thought/debates surrounding the significant idea of conscience/sexual ethics and the influence on ethical thought of developments in religious beliefs.

There is no coursework element to the course.

Sixth Form General RE / MET (Morals, Ethics & Philosophy) – All Sixth Form students study a Morals, Ethics & Philosophy General RE course for a double period per week. In the course they will examine areas such as The Just War, Capital Punishment, Human Rights, Science versus Religion debate and the Ethics of areas like Abortion and Euthanasia. There is a yearly Conference examining one of the areas from the course.