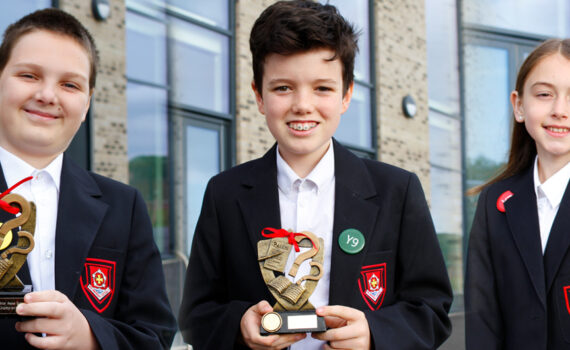 With restricted movement and socialising in school our calendar of House Activities will look a little different this year, however, our fantastic and undeterred team of House Leaders have already hosted our first event of the new year.

On Wednesday 9th September 2020 the ever popular Year 7-9 House Quiz was held with a bit of a difference.

Normally, we would have ten teams (two teams for each house) and the students would battle it out in the hall, however, to keep everyone safe, this year we held three simultaneous year group quizzes in different locations.

Over eight rounds of questions, with topics including TV & Film, Sport, Flags & Music, 10 students from each year group took up the challenge and charged up the brain cells to compete for their houses with all of the scores being pooled to create our result.

Last years’ quiz champions St. Anne Line were out to defend their crown and they did so with style putting them on the top spot of the House Points table, the same position they finished the end of the last academic year, lifting the trophy for the very first time.

A special mention must go to Year 9 AL competitor Theo Woods who competed and won on his own after his teammate couldn’t make it. Fabulous achievement.

The quiz is always a great event, well attended, fun and friendly competition.  Enjoyed by everyone involved. Well done to the students for taking part in this years’ competition.